​
Smooth- The most commonly seen coat type, sometimes referred to as "shorthaired". Require minimal grooming. Even though they have short hairs, they still shed, although minimal.

Long- The longhaired variety is seen less often than smooths but have become increasingly popular over the last 10 yrs. Most people agree that longs have a milder temperament than smooths. Grooming: Longs do not require "cuts", just a simple brushing twice a week will keep them beautiful! Shedding is about the same as Smooths. ​

Wire- The Wirehaired Dachshund is the least seen of the three coat types. They have coarse terrier like fur and grooming is best left to someone with experience with wires. Wires have a silly personality, more active and clown like than the other coat types.​

Welcome to Oak City Kennels! We are a premier breeder of Champion lineage, health tested smooth miniature Dachshunds.  All of our breedings are planned to bring top of the line, healthy, temperamentally sound puppies to both the show ring and your home.

​Tweenie- 12- 15 lbs, although not officially recognized by AKC as a separate size catorgory, many people recognize the "inbetween" sized Dachshund by this name. The majority of Dachshunds in the USA,  fall into the "Tweenie" size catogory.

Standard- 16 lbs-32 lbs (average size 16-25lbs, although some are larger) True Standards are not seen as often outside of the show ring.
​

You should always choose a dog based on what he’s like, not what he looks like, and the Doxie’s unique physical appeal easily becomes the focal point. Luckily, he is as much fun to live with as he is to look at. But because he was an eager hunter, he can be a bit stubborn and sometimes wonders why you’re not onboard with his plans. It’s hard to stay in a bad mood with a Dachsie around—his upbeat, curious, and friendly nature is contagious.(AKC Dachshund History & Training/Temperament)

The Dachshund, meaning "badger dog" in German, is a lively breed with a friendly personality and keen sense of smell. Known for their long and low bodies, they are eager hunters that excel in both above- and below-ground work. One of the most popular breeds according to AKC® Registration Statistics, they come in three different coat varieties (Smooth, Wirehaired or Longhaired) and can be miniature or standard size. The dachshund comes in 12 recognized colors and three types of markings.

The Dachshund can be found in historical accounts dating back to the 15th, 16th and 17th centuries, when illustrations reflected badgers being hunted with dogs with elongated bodies, short legs and hound-type ears.
The dogs of medieval Europe were noted to have the tracking ability of hounds and the proportions and temperament of terriers, much needed to pursue their main quarry of badgers. 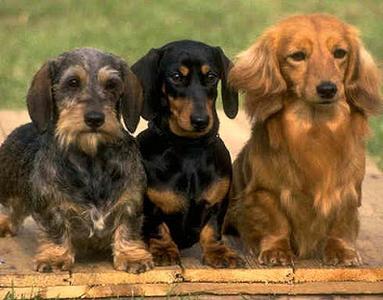